Walter Benjamin and Bertolt Brecht — The Story of a Friendship

Benjamin and Brecht: The Story of a Friendship
By Nick Wright

The diverse appropriations of Walter Benjamin – the cultural theorist and critic — of his life and work, inevitably bear the marks of Cold War polarities. Liberal sentiment regards his intimacy with Bertolt Brecht as a Stalinist disfiguring of his sensibility. Gerschom Scholem’s account has Benjamin more rooted in Jewish metaphysics. The not-so-New Left privileges his connections with the Frankfurt School.

Against these accounts, the great strengths of Erdmut Wizisla’s Benjamin and Brecht The Story of a Friendship rest on his exquisitely detailed scholarship and his irrefutable demonstration that the relationship between the two was not only reciprocal and creative but that it was grounded in a shared world view.

Brecht’s reputation for an unwavering political realism and his unshakable Bolshevism of a distinctive German temper is tamper-proof. Incontestably, it is marxism which anchors his aesthetic.

But Benjamin, who died on the French Spanish border by his own hand — caught between the Nazi tide and the refusal by the Spanish authorities to allow him passage to Lisbon and thus to refuge in the USA – has had the integrity of his ideological standpoint assailed from many directions.

Had Benjamin survived to join Brecht, who returned from exile in the USA to help construct the socialist order, the creative life of the German Democratic Republic would have been further enriched.

Erdmut Wizisla’s studies commenced in the GDR, he gained his doctorate with a study which is the foundation of this intricate and clear-sighted book. He heads the Bertolt Brecht Archive and since 2004 the Walter Benjamin Archives at the Academy of Arts in Berlin and is an honorary professor at the Humboldt University in Berlin.

The book puts a decisive end to the disputed discourse that marks our understanding of the relationship between the two giants of German culture. Its title bluntly refutes the analysis which derives from the earlier Story of a Friendship by Gershom Scholem. Whereas Scholem rooted his account in what are inevitably subjective reminiscences of his friendship with Benjamin Wizisla contests his view with a detailed account of Brecht and Benjamin’s collaboration which grounds Benjamin’s thinking in their shared politics and materialism as much as their friendship.

Thus, in notes on his Commentary on Poems by Bertolt Brecht Benjamin writes:
“The tradition of the oppressed is of concern to Brecht (Questions from a Worker Who Reads) The tradition of the oppressed is also the decisive factor in his vision of the banned poets. Brecht emphasises the basis, the background, against which ‘great princes of intellect emerge’. In bourgeois representation this background tends to be a uniform grey.”

Benjamin’s writing is marked by an exceptionally wide compass — from a deep engagement with German literature, both high culture and the popular culture of the lower orders — but also the religious and metaphysical elements in Jewish culture, fragmentary features of modern life, dialectics, the effect of montage technique and famously, the impact of mechanical reproduction on art.

The core of the book is a section which sets Benjamin’s eleven essays on Brecht’s work against the political conditions of Germany in the interwar years, drawing strongly on the cultural politics of the German left. More fragmentary evidence is available in the passages which give insights into Brecht’s attitude to Benjamin’s work. It is clear that Brecht gave practical support to Benjamin while their personal relations were deepened by shared exile in Paris and by Brecht’s hospitality in the summers of 1934, 1936 and 1938 at Skovsbostrand in Denmark. Many of the photographs that depict the two men show them playing chess during their shared sojourns.

Wizisla cites both Hannah Arendt and Adorno to support the view that Brecht regarded Benjamin both as “the most important critic of the time” and that he was Brecht’s “best critic”.

The book ends with an assembly of surviving documents that illustrate the exceptionally fruitful collaboration between Benjamin and Brecht with the participation of, among others the film and theatre critic Herbert Ihrering, philosopher Ernst Bloch and Georg Lukács in preparing the ultimately abortive project for a journal Krise und Kritik.(Crisis and criticism).

Wizisla speculates, drawing on recollections by Bloch, that the stimulus for this project may have lain in the formation of the Nazi Kampfbund für deutsche Kultur (Struggle League for German Culture). Bloch’s account has as the prospective title Journal of Cultural Bolshevism.

For the specialist Benjamin and Brecht The Story of a Friendship marks a new stage in the evaluation of both the period and the personalities and the passages which bring out the intensity and fraternity entailed in their collaboration are where Wizisla’s method is most fruitful.

Wizisla calculates that in that dangerous period after the German bourgeoisie handed power to Hitler Brecht and Benjamin spent ‘a total of more than eleven months living and working in direct proximity to each other’ — a good part of it in Brecht’s house in Denmark.

This is demanding stuff. Wizisla includes the minutes of their discussions around Krise und Kritik., a valuable source and one which demonstrates the ideological convergences and synergies that result from their collaboration as well as the extraordinarily fertile character of this period in which the changes in political direction entailed in the Communist International’s highly creative response to the realisation that the Nazi regime was no passing phenomenon were reflected and refracted through prism of their shared critical thought.

While marxism’s claim to be a general theory makes it especially attractive to people working in a wide range of specialisms it is sometimes true that specialists tend towards revisionism in relation to their own discipline and dogmatism in relation to the over arching theory. It is here that both what might be termed New Left assumptions about their relationship, and more particularly Scholem’s account, which seem to suggest that Brecht’s ideological fortitude positioned Benjamin as a subject, are subverted.

Because Benjamin’s writings are so fruitful for contemporary cultural theorists — especially those engaged in a critical encounter with modern visual culture and mass media — there is a tendency to read him against contemporary political configurations rather than see him in the context of the thirties. But both Benjamin and Brecht were politically active revolutionary intellectuals in a period when the strategic turn of the world communist movement was critical for the eventual defeat of fascism — and because they were partisans of this strategic reorientation their encounter, and their collaboration, can only be read as symptomatic of their shared politics.

Benjamin’s unwavering realism: “A total absence of illusion about the age and… an unlimited commitment to it” and Brecht’s characteristic fusion of political analysis with dramatic effect both illustrate their shared commitment to the idea, as Benjamin puts it, that’: ‘the politically correct tendency includes a literary tendency’.

Such partisanship in cultural production and criticism is unpalatable to some.

For the general reader or for a partisan of the left it is an exemplary demonstration of the dialectical method in biography mobilising, as it does, both a deep understanding of the conjectural factors — political and cultural — that conditioned this friendship and the interplay of their cultural production.

The book draws on a rich assembly of writings, correspondence, texts, ephemera, documentary evidence and recollections. Clarity could be lost in this rich miscellany without Wizisla’s rigorous method — dialectical materialism at work.

The translation, by Elizabeth Shuttleworth, is of great elegance and clarity — not always the case in translations from the German.

This is an important addition to the literature on Benjamin. Wizisla’s title deliberately parallels that of Gershom Scholem’s book on Benjamin, and indicates his intention to put Benjamin’s relationship with Brecht on a par with those with both Scholem and Adorno. In doing so, Wizisla is counteracting the tendency to downplay Brecht’s importance to Benjamin, a tendency initiated by Scholem and Adorno and continued by those influenced by them (not least in the editing of Benjamin’s Gesammelte Schriften). The result both enriches our understanding of the ‘constellation’ of friends Benjamin positioned around himself and highlights his commitment to Marxism.

One reason why Benjamin and Brecht’s friendship has been underemphasized is because it was not, unlike Benjamin’s friendships with Scholem and Adorno, primarily an epistolary one. Brecht was never a great letter writer, and during most of the 1930s postal communications between the two were circumscribed by fear of censorship. Instead, the bond between the two men flourished during the time they spent together. Wizisla calculates that between 1933 and 1940 they ‘spent a total of more than eleven months living and working in direct proximity to each other’ (55), most notably during Benjamin’s stays with the Brecht household in Denmark. Much of the charm of the book comes in its accounts of these visits, for example in relation to the games played by the various emigrés who gathered around Brecht. The book includes three photographs of Benjamin and Brecht playing chess, which have been expertly analyzed by Andrew McGettigan in the May/June 2010 issue of Radical Philosophy. Card and board games also featured, including Monopoly (at which, according to Brecht’s children, Karl Korsch didn’t like losing!).

Most of the book is devoted to the intellectual substance of the relationship. Wizisla deals with this under three headings: first, Benjamin and Brecht’s collaboration in the early 1930s on an abortive project for a new journal to be called Krise und Kritik; second, Benjamin’s work on Brecht; and third Brecht’s responses to and influence on Benjamin’s work. The Krise und Kritik project was the most sustained of a series of initiatives Benjamin and Brecht were involved in, including the famous plan ‘to annihilate Heidegger’ in a reading group (41). Wizisla guides us through the deliberations for the journal, adding as an appendix the minutes of the discussions. His approach throughout is to track in very scholarly detail the specific influences, parallels and resonances between the writings of the two men. However, he sticks so close to the sources that one often cannot see the wood for the trees. In fact, the book seems to presuppose that one already has a firm grasp of the terrain, and so can assimilate and interpret the detail provided accordingly.

The philosophical aspects of Benjamin’s and Brecht’s thinking are not treated by Wizisla, who instead focuses on the literary and political issues actually discussed by them. Their interest in Heidegger was short-lived and not followed through, and in any case seems to have been more directed to the type of intellectual leadership Heidegger appeared to aspire to rather than the content of his philosophy. Philosophical topics were to be addressed in Krise und Kritik, but by Kracauer and possibly Adorno, not Benjamin. The idea of critique or criticism itself, central to the project of the proposed journal, did stimulate a momentary philosophical debate, with Benjamin wanting to assert its Kantian (and romantic?) character and Brecht resisting this in the name of a scientific empiricism (though one which can also be seen as having Kantian antecedents, by way of the logical positivists).

Wizisla’s work is already proving to be rewarding for Benjamin and Brecht specialists, who are best placed to appreciate his scholarly endeavours and develop them accordingly. 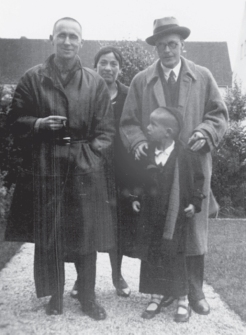 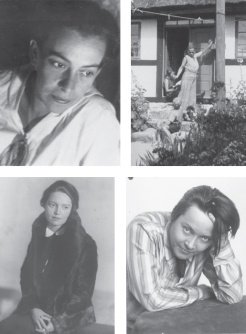 Benjamin in front of the Brechts’ house, Skovsbostrand, Summer 1938