A journalist, seemingly sharing the illusions of politicians, writes “it’s time for the gilets jaunes to decide who and what they want to be”. (The Guardian, 29/01/2019) The politicians of france (and of everywhere, faced by a similar insurrection) are eager to have a “who” and “what” behind every rebellion, for it is in this manner that rebellions can be induced to negotiate, to be domesticated and subdued.

Many of the gilets jaunes, even in the face of their divisions, continue to refuse unifying identification and thus representation. And the chimera of unity is nothing but a desired instrument of subjection. What has characterised the insurrection hitherto is a diversity that understands and acts together, more or less, but without ever ignoring its differences. Indeed, the insurrection has been as much against itself (as a permanent, internal struggle of practice and thought), as it is against the State.

The voices from within the movement are many, but few are as significant as the initiatives taken by the yellow vest assembly of Commercy.

With assemblies of the Pyrenees, Brittany and Normandy, Cévennes and the Alps, Alsace and Lorraine, Paris, Nantes and Poitiers, and more (some one hundred), a third statement-manifesto was issued, which we share below.

We, the yellow vests of the roundabouts, car parks, squares, assemblies, demonstrations, we are gathered this January 26 and 27, 2019 in an “Assembly of Assemblies”, bringing together a hundred delegations, responding to the call of yellow vests of Commercy.

Since the 17th of November, from the smallest rural village to the largest city, we have risen up against this deeply violent, unjust and unbearable society. We will not let this continue! We rebel against the excessive cost of living, precariousness and misery. We want our loved ones, our families and our children, to live in dignity. 26 billionaires own as much as half of humanity; this is unacceptable. Let’s share the wealth and not the misery! Let’s finish with social inequalities! We demand the immediate increase of wages, social assistance, allowances and pensions, the unconditional right to housing and health, to education, free public services, and for all.

It is for all of these rights that we daily occupy roundabouts, that we organise actions, demonstrations and that we discuss everywhere. With our yellow vests, we speak again, we who never have.

And what is the government’s response? Repression, contempt, denigration. The dead and thousands of wounded, the massive use of weapons at close range that mutilate, blind, injure and traumatize. More than 1,000 people were arbitrarily sentenced and imprisoned. And now the new law called “anti-casseur” [anti-vandal/destroyer] aims simply to prevent us from demonstrating. We condemn all of the violence against protesters, whether they come from the forces of order or violent groups. None of this will stop us! To demonstrate is a fundamental right. End impunity for the police! Amnesty for all the victims of repression!

And what a sham the great national debate is [initiated by Macron], something which is nothing more than a communication campaign by the government, which instrumentalises our desire to debate and decide! True democracy, we practice it in our assemblies, on our roundabouts, it is neither on the TV sets nor in the pseudo round tables organized by Macron.

After having insulted us and treated us as less than nothing, now he introduces us as a hateful fascist and xenophobic crowd. But we are the complete opposite: neither racist, nor sexist, nor homophobic, we are proud to be together with our differences to build a society of solidarity.

We are strong in the diversity of our discussions, and right now hundreds of assemblies are developing and proposing their own demands. They concern real democracy, social and fiscal justice, working conditions, ecological and climatic justice, the end of discrimination. Among the most discussed demands and strategic proposals, we find: the eradication of misery in all of its forms, the transformation of institutions (RIC [citizens’ initiative referendum], a constituent assembly, end of the privileges of elected officials …), the ecological transition (fuel poverty, industrial pollution) …), equality and the taking into account of all, regardless of nationality (people with disabilities, equality between men and women, the end of the abandonment of working-class/popular neighborhoods, the rural world and the overseas regions of the country … ).

We, yellow vests, invite everyone, with their means, and to the extent of their ability, to join us. We call for the continuity of the Acts (Act 12 against police violence, before the police stations, Acts 13, 14 …), for the continuity the occupations of the roundabouts and the blockading of the economy, to build a massive and permanent strike, from the 5th of February 5th. We call for committees to be formed in workplaces, in school and everywhere else, so that this strike can be built from the ground up, by the strikers themselves. Let’s take our affairs in hand! Do not stay alone, join us!

Let’s organize ourselves in a democratic, autonomous and independent way! This assembly of assemblies is an important step that allows us to discuss our demands and our means of action. Let us federate to transform society!

We ask the ensemble of yellow vests to circulate this call. If, as a yellow vests group, you agree, send your signature to Commercy (assembledesassemblees@gmail.com). Do not hesitate to discuss and formulate proposals for the next “Assembly of the Assemblies”, which we are preparing right now.

Call proposed by the Assembly of Assemblies of Commercy. It will then be proposed for adoption in each of the local assemblies. 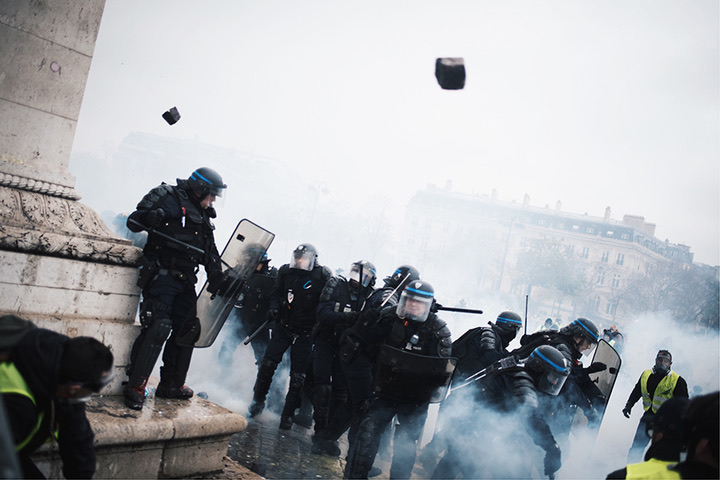 Since the beginning of the movement yellow vests movement, of mysterious yellow letters are distributed at roundabouts and on social networks. With as much accuracy as poetry, this 20th missive lays the groundwork for a strategy of struggle: “we gather more and more people so that the cold reason from above gives way to the good sense from below.”

This world has become logical. It imposes its relentless pace on our lives, and on our bodies. Those at the top ask us to bend over while waiting for the catastrophe. They ask us to join their ranks! They ask us to make a deal with the devil! But it is by staying away from their world that we can stop this hellish pace. We still have the opportunity to turn the tide, to sow new seeds on fertile soil. Let us no longer be seduced by the refrain of reform, or by candidates lists to the Europeans elections! The providential man is us!

We must from today put into practice a radical project: the clear separation with the world from above. We must launch local experiments in the recovery of abandoned, polluted, endangered and cleared land! We must rebuild our world from below with our hands, with our hearts, with our vital force. Today, our combat strategy is to gather more and more people so that the cold reason from above gives way to the good sense from below.

Let us now turn to serious matters! Let us unravel the national and European territory! Relentlessly, let us occupy it with our know-how: let us finally secede! It is no longer a question of our rebelling, it is a question of applying new practical determinations, of giving birth to new ways of being in common! Now that we have finally understood and demystified the language from above, let us build together the foundations of yellow houses, yellow communities, yellow lands! Our commons from below must become concrete, active, visible truths! We must engage in a permanent occupation, that which we have begun on the roundabouts, and extend it to infinity. We know it, we have seen it, we have lived it, we can count on the immense generosity of a France of solidarity.

Let’s be sure! The one from above does not believe in his reality anymore! Resigned, s/he lives there out of weariness and weakness! Ultimately, s/he does not like the monster s/he has given birth to, and prefers to take refuge in her/his tower of denial! S/he does not want to confess her/his fault! S/he wants to go to the very end because s/he must be right at all costs! To us, women and men below, it for us to make him confess her/his misery! Let us get him down from these desert heights, and bring her/him back to life, to us! We must now destroy at the root all the fantasised illusions of this world from above, that sells us every day waste, death, sadness with a sparkling and shiny packaging!

We are today led by invisible logics, by algorithms stored in ultra-secure rooms that day and night make the destructive machine! We must break them to live again! We must annihilate them! Macron is only the first floor of the rocket! We must certainly overturn it, but we must also attack these mathematical places: banks, control centers, shopping centers, major global organisations, stock exchanges! The machine of value creation must be blocked and destroyed! We must derail this train of death! Let’s take the controls of this world on autopilot!

So, men and women from below, get out of the network, get out of the digital boxes, get out of this mortuary prison! Let’s break programs! Do not hesitate anymore! Do not go back! Let’s deflect the goal! Let’s never let ourselves be encoded by the world from above! Let’s create short circuits from below! Spread the Yellow Virus worldwide!