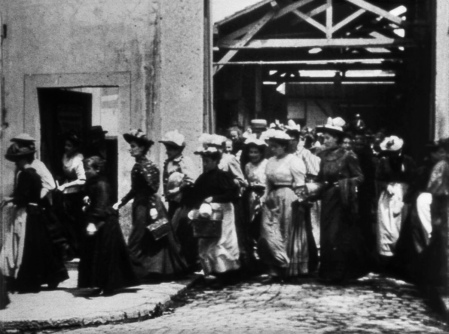 In front of the camera lens

Where, oh where have you gone,

Golden days of my youth?

is rising over sombre years.

But the sentence of light is not only, as some would have it, the history of the new myths of the red sun and the bloody catastrophe they led to. It may, more simply, be the ‘justice’ that the images from Mother Dao do to the colonized of the recent past. Dutch colonizers in Indonesia took those images to celebrate their work civilizing the natives. In the forest where wild creatures once lived, a humming hive of industry now rose and in it their sons gained skill, dignity and a salary by extracting and forming metal. At school, in the dispensaries, grown-ups and children consented to the teaching that elevated them, to the hygiene of showers, to the vaccinations that saved their bodies and to the signs of the cross that saved their souls. These images of the recent past have been organized differently by Vincent Monnikendam. And the underlying principle of their reorganization is not to show the dark underside of oppression beneath this civilizing parade, to move from the ‘happiness’ pictured by the colonizer to the unhappiness and revolt of the colonized. No doubt the poetic voice off that accompanies the images voices the suffering of the earth and of a life that aspires to resume the ‘course of its thoughts’. But this very accompaniment is not so much a counterpoint to that suffering as the manifestation of a capacity for voicing the situation, for turning it into fiction. What it thereby accompanies on screen is a minute yet decisive change in the appearance of the faces and attitudes of the colonized, in the ‘happiness’ they express: they respond to the surprise of these imposed exercises with attention, with a certain pride in playing the game, as perfectly as possible, before the blackboard at school or the iron at the forge. They quietly assert their equal aptitude for all kinds of learning, for all the rules and every kind of contortion; they assert their equal intelligence. And watching the face of the little girl who takes such pains to spell the master’s language correctly, we seem to catch an echo of a moment of sentimentality on the part of the ironist Karl Marx, when he recalls the gatherings of the League of the Just and celebrates the ‘nobility of man’ that ‘shines from the workers’ brows’. It is a nobility of the same kind that makes the eye of the camera wielded by the colonizer shine. Consciously or unconsciously. Intentionally and beyond what was intended.

1 Translator’s note: The French word for Holocaust denial or revisionism, is négationnisme . A revisionist is a négationniste .

The threshold of the visible

But doesn’t this mean accepting a little too conveniently the illusions of cinéma-vérité and history as offered in the images produced by the winners? The same Harun Farocki who showed us the historic power of the amateur filmmakers of Bucharest reminds us, in his other films, that, in spite of everything, the candid eye of the camera sees only what it is ordered to see. If the Allies didn’t notice the concentration camps, despite the camps being perfectly ‘visible’ in the aerial photographs the Allies scanned for industrial installations to bomb, this is also because the cinematographic window of the visible is itself, to start with, a frame that excludes. Or rather, it is the threshold between what is, and what is not, interesting to see (Workers Leaving the Factory). The first film ever made, Workers Leaving the Lumière Factory , all in all may well have determined, in forty-five seconds, the fate of cinema, defining the threshold of what it should or should not see. Cinema has never ceased replaying the same scenario. It waited for its characters – like the man in love with Marilyn in Clash By Night – at the factory gate. It has never been interested in what was said inside. It stepped inside only very briefly to film fake workers, gangsters who had come to steal the workers’ pay. Against the backdrop of this original parcelling out of the visible and the invisible, the heard and the unheard, certain sequences of history stand out at the boundary between two spaces and two sets of meaning – scenes such as the Hamburg dockers’ strike, for instance, as filmed by Pudovkin. In these scenes we see the imperturbable face of the picket watching the strike breaker buckling under his load while other strike breakers are already lined up behind the fence, waiting to take his place: emaciated and feverish faces glued to the bars of the fence in which we might already have recognized, Farocki tells us, the figure of the people shut away in the camps that the Allied soldiers couldn’t yet make out in 1944.

In the face of disappearance