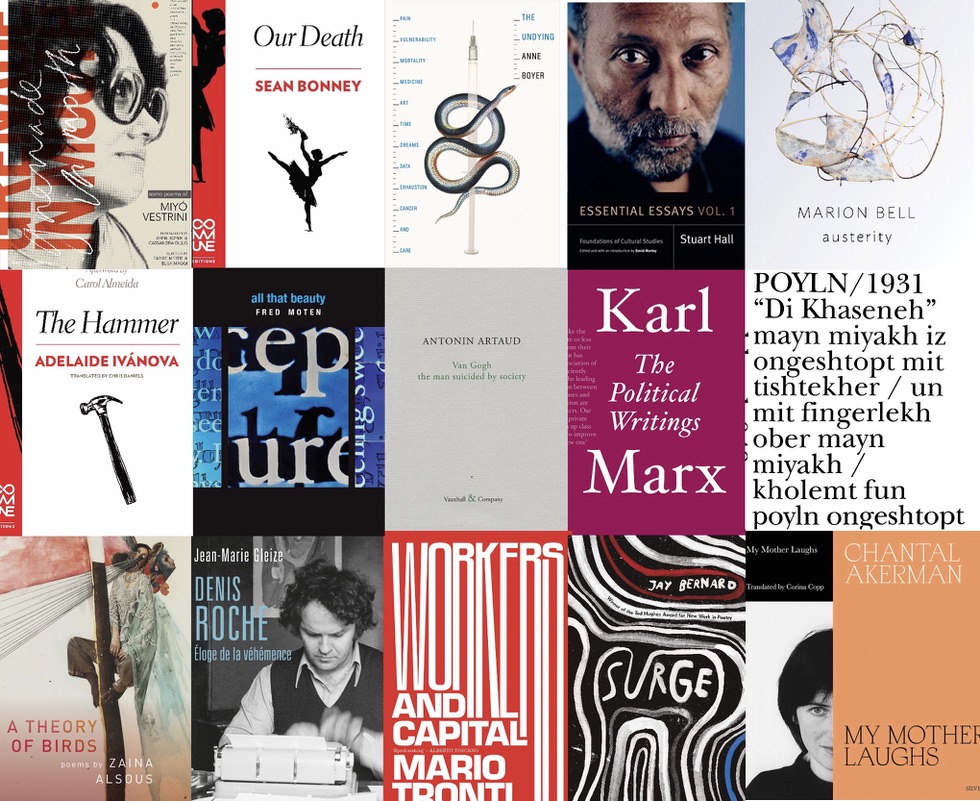 Those who write are not even of a race. Nor a caste. Nor a class. Nor are they one. They ruin the point of living, like women in a world of science.
Behind thick lenses, the court is never dull. They have all privileges: from philosophy up to anger, passing through conjugal relations, and the length
of the paragraphs. Between the rights of man it is figured that the writer should write largely for himself first, then for the others, with a purpose well or poorly defined: to flood the window displays, walls, countries, homes. Or, when all is said and done, to commit suicide

ARANJUEZ // Don’t be ridiculous. / No one dies from holding their breath. / Think of your brittle bones, / of your sweaty folds, / of your dry vagina / and your receding hairline. / Or of your heart attack when you fake orgasm. / Women die of that. / Why you gotta be so obscene? / Because for twenty years I’ve not gone to Aranjuez / and that makes me pissed.

These days everyone is writing their final book. Whatever. I’ve lost everything as well. My body is made up of three needles, several coins, a system of nitrates and something wankers would call “a philosophy.” I see in the dark and like to smash mirrors. For many other people things are far worse. I roam around the town, reciting an old poem by Anita Berber: CORPSE. KNIFE. CORPSE. KNIFE. LIGHT. There are moments each evening when I think I can see that light. It shines inside all the rooms I have lived in, all those rooms and cities that we have always despised. COINS. MIRRORS. LIGHT.

Fuck it. The sun is doing whatever suns do / The citizenry all creeping like flowers. / Idiots. / The sky is grey on further grey and / The haunting, its sharpened hail, never stops.

I began it the week I was diagnosed with aggressive breast cancer, in August 2014. I had just turned forty-one, and my life was finally stabilizing, going really well; I felt incredibly vibrant and healthy, and then in just a matter of days everything I knew to be the case was no longer the case. They were telling me I was this sick person who, unless I got this really aggressive treatment, would not have very long to live. I wrote during the treatment because I didn’t know if I was going to live or die and, more so, because the treatment for chemotherapy causes brain damage, memory loss, and loss of words. So each time I would go in for treatment, I didn’t know which part of me would be lost. I wrote thousands of words’ worth of journals during treatment, and afterwards I knew I was going to live but was dealing with having become disabled and mutilated from treatment. So one hundred thousand words were condensed and condensed and condensed into forty thousand words, into a much smaller prose work that relies on those documents that I wrote during the time but that doesn’t really reproduce them. (An Interview with Anne Boyer | The Believer)

Anne Boyer is a staunch communist, but never the elitist communist intellectual. Boyer has become a trusted voice in communist writing by eschewing pretentious frills and whittling communist ideas down to their central, glowing ember of truth: recognizing our shared abundance and innate desire to help one another.
She is a light. She is a witch. She is an ocean. (Callie Hitchcock)

From his arrival in Britain in the 1950s and involvement in the New Left, to founding the field of cultural studies and examining race and identity in the 1990s and early 2000s, Stuart Hall has been central to shaping many of the cultural and political debates of our time. Essential Essays—a landmark two volume set—brings together Stuart Hall’s most influential and foundational works. Spanning the whole of his career, these volumes reflect the breadth and depth of his intellectual and political projects while demonstrating their continued vitality and importance.

Fred Moten | all that beauty

On the other muhfuckin’ hand, / neoliberalism is a concerted attempt / to obscure the essential and essentially / exclusionary relation of identity and / politics, which is better known as / liberalism, which is less well known / as fascism, (business) man. It’s ashamed / of where it comes from, a cold city on a / dry marsh. Lots of loose talk about hills / and light, and here we come and go, the / wet / recrudescence of the marsh, the much / more + less than malarial life of drops of / nonlocal gold, as anti- and ante-aristocratic / swarm laid open to natural, natal, univocal / return.

It’s a man who has chosen to become mad, in the / socially accepted sense, rather than disregard a certain / superior idea of human honour. / That way, / society strangled in its asylums all those it / wanted to rid itself of or to defend itself against, as they / refused to become party to certain major foul acts. / For a madman is also a man whom society did not / want to hear, and whom it wanted to prevent spouting / unbearable truths. / But, in that case, internment is not its only weapon, / and the concerted gathering of men has other means to / grind the wills it wants to break. / Beside the little spells cast by backcountry sorcerers, / there are the great periods of world spell-casting, in which / all alerted consciousness periodically takes part. / So during a war, a revolution, a social upheaval still in / its infancy, the collective consciousness is questioned and / questions itself, and also passes judgement. / It can also be provoked and taken out of itself in / some resounding individual cases. / So there were the collective spells cast on Baudelaire, / Poe, Gérard de Nerval, Nietzsche, Kierkegaard, Hölderlin, / Coleridge, / and there was one on Van Gogh. / It can happen during the day, but preferably, / generally, it happens at night. / Strange forces are lifted and brought into the astral / vault, into that kind of dark cupola that constitutes, above / all human respiration, the poisonous aggressiveness of / most people’s evil spirit. / So a few rare lucid and well-intentioned wills that had / to struggle on earth end up, at certain hours of day or / night, deep in states of authentic and waking nightmares, / surrounded by the formidable suction, the formidable / sprawling oppression of a kind of civic magic that will / soon be seen appearing openly in social conventions.

Karl Marx was not only the great theorist of capitalism. He was also a superb journalist, politician, and historian. This book brings together all of his essential political and historical writings in one volume for the first time. These works allow us to see the depth and range of thought in the mature Marx, covering a period from the tumultuous revolutions of 1848 that rocked Europe through to the end of his life. With a foreword by Tariq Ali, and including The Communist Manifesto, The Eighteenth Brumaire of Louis Bonaparte, The Class Struggles in France, and The Critique of the Gotha Programme, this volume shows Marx at his most astute, analysing the forces of global capitalism as they played out in the world around him.

THE CONNOISSEUR OF JEWS // if there were locomotives to ride home on / & no jews / there would still be jews & locomotives / just as there are jews & oranges / & jews & jars / there would still be someone to write the jewish poem / others to write their mothers’ names in light— / just as others, born angry / have the moon’s face burnt onto their arms / & don’t complain […]

Zaina Alsous | A Theory of Birds

We know the Nazis loved / America; Hitler yearned to paint a twin, // a green room where the dead are everywhere. / Asked Abraham before the flame, to the obedient tribe // What are these statues you cling to? / Why calico, why Spanish moss, why the crickets scream. // In a segregated graveyard, no stone reads / private or public; the local jail is everywhere. // Before another body is buried, a window is broken. / A window was broken. The window is broken. // In a high school history class, white children raised / their eyebrows when I raised my voice. // I don’t know what they thought I was capable of; / I wish I was more capable of it.

THE UNIVERSITY OF ARKANSAS PRESS

Workers and Capital is universally recognised as the most important work produced by operaismo, a current of political thought emerging in the 1960s that revolutionised the institutional and extra-parliamentary Left in Italy and beyond. In the decade after its first publication in 1966, the debates over Workers and Capital produced new methods of analysis and a new vocabulary for thousands of militants, helping to inform the new forms of workplace, youth, and community struggle. Concepts such as “neocapitalism,” “class composition,” “mass-worker,” “the plan of capital,” “workers’ inquiry” and “co-research” became established as part of the Italian Left’s political lexicon.

The poems here seethe with unspoken rage and acerbity; they read like thinned-out paraffin, something on the cusp of explosion… A brutal indictment of Britain’s racist history and hypocrisy in the face of the facts… Bernard’s persistent question drills down, line by line, into Britain’s dark subconscious (Marek Sullivan)

I take this January morning in my hands and wonder if it should go under London, England, Britain, British, Black-British – // where to put the burning house, the child made ash, the brick in the back of the neck, the shit in the letter box and piss up the side of it? // I file it under fire, corpus, body, house.

In 2013, the filmmaker Chantal Akerman’s mother was dying. She flew back from New York to Brussels to care for her, and between dressing her, feeding her and putting her to bed, she wrote. She wrote about her childhood, the escape her mother made from Auschwitz but didn’t talk about, the difficulty of loving her girlfriend, C., her fear of what she would do when her mother did die. Among these imperfectly perfect fragments of writing about her life, she placed stills from her films. My Mother Laughs is both the distillation of the themes Akerman pursued throughout her creative life, and a version of the simplest and most complicated love story of all: that between a mother and a daughter.

After her hospital outing, she (my mother) talked to me only about doctors, aches and pains, and who would be picking her up to accompany her to the airport. / And who would pack her bags. / She couldn’t anymore. This time she really couldn’t do it. Arthritis had mangled her hands and was starting in her feet too. / Hip pain. / Her eyes were running, or not enough, due to the dryness. / And each day a shot in the thigh for her bones. / Without this she’d be full of sand. No longer an upright person, but sand lying in a bed. / But she would hold on. She knew it and so did I.