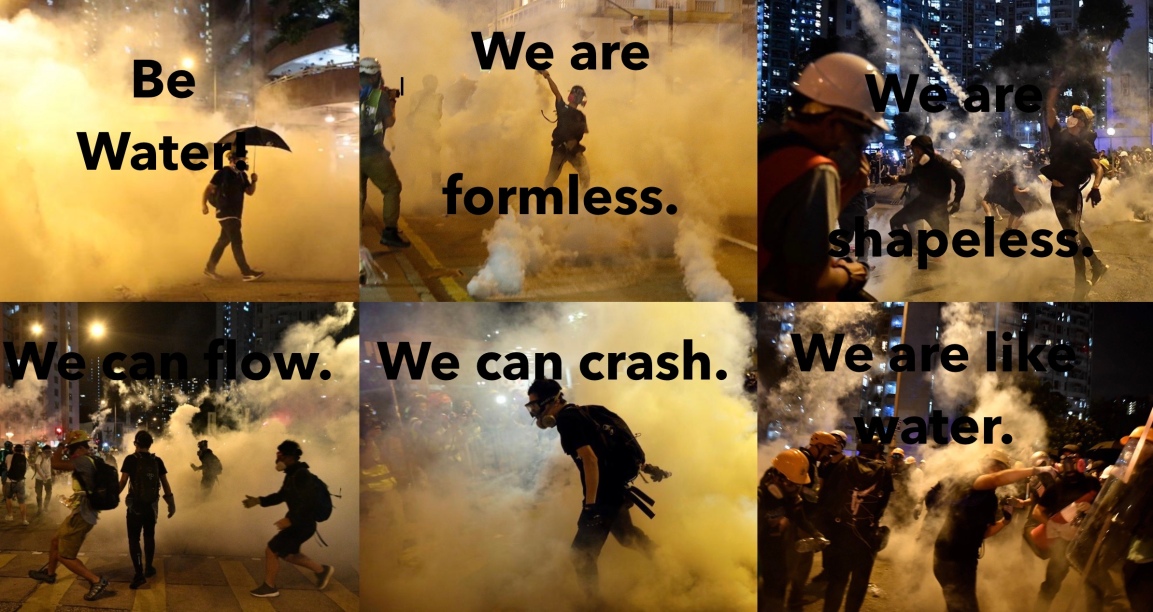 TRILCE XXVII    That flood frightens me, / good memory, strong sir, implacable / cruel sweetness. It frightens me. / This house does me complete good, complete / place for this not knowing where to be. // Let’s not go in. It frightens me, this favour / of returning by minutes, by blown up bridges. / I’m not going ahead, sweet sir, / brave memory, sad / singing skeleton. // What content, of this haunted house, / gives me deaths by mercury, and blocks / with lead my conduits / to sheer reality. // The flood that doesn’t know how we’re doing / frightens me, scares me. / Brave memory, I’m not going ahead. / Whistle, whistle, blond sad skeleton.
GLOSS    The onrush of memory produces fear. The self is split; each movement of the poem, from word to word (‘cruel sweetness’) and line to line, veers in a different direction. The place of memory which the self cannot stand to enter is also the place which could do it complete good. The faculty of a ‘brave memory’ is separated from its disembodied skeleton, which makes music nonetheless. […] The poem presents a now of failure, which is also a perception of what cannot be faced in this moment, and therefore what remains to be traversed.
CÉSAR VALLEJO, TRANSLATED BY WILLIAM ROWE & HELEN DIMOS

We are told cancer is an intruder to be fought, or an errant aspect of ourselves, or an overambitious cell type, or an analogy for capitalism, or a natural phenomenon with which to live, or a certain agent of death. We are told it is in our DNA, or we are told it is in the world, or we are told it is located in the confused admixture of genes and environment that no one can locate or wants to. We are given only the noisy half of probability that its cause is located inside of ourselves and never the quiet part of probability that cancer’s source pervades our shared world. Our genes are tested: our drinking water isn’t. Our body is scanned, but not our air. We are told it is in the error of our feelings or told it is in the inevitabilities of our flesh. We are told there is a difference between illness and health, between what is acute and what is chronic, between living and dying, too. The news of cancer comes to us on the same sort of screens as the news about elections, in email at the same minute as invitations to LinkedIn. The hash marks of the radiologists are the same as those of the drone pilots. The screen life of cancer is the screen life of all mediated global terror and unreality, too.

Zaina Alsous | A Theory of Birds

Reading the world historically and dialectically has made it possible for me to articulate a means of existing in the world beyond mere despair, so I can’t succumb to this notion of history “ending” because that feels like admitting defeat. This poem was written in communion with Frantz Fanon’s “Concerning Violence,” a chapter in Wretched of the Earth, and also thinking about my friends and comrades in North Carolina who had recently torn down a confederate monument. Weeks after their action the entire political landscape and imagination around confederate monumentation had shifted. I was trying to put into language this awareness of contradictions, how our lives are so fundamentally consumed by and shaped by violence: state, gendered, economic, and yet militancy remains one of the only means in which we can reclaim some of our dignity. If nothing else, my years in political organizing have taught me that things change all the time, every second, and these changes aren’t immune to their historic conditions, but the conditions are not an inevitable container. The window broken still remains a window.

We know the Nazis loved / America; Hitler yearned to paint a twin, // a green room where the dead are everywhere.

Meanwhile, tourists will stand far outside any clouds of teargas that may appear. It is part of what defines them. They might want a trace of the smell on their clothes, but still it is the avoidance of pain that is the central fact of their collective dream. Nothing will cause them to disperse. They hold maps. Here is the factory. Here is the museum. Here is the hell of stars. They talk to the cops without fear of death, but without this fear they will never know or remember a thing. Teargas is the only mnemonic that counts. It’s system of recitation a network of broken bones. But tourists don’t want to know about this. Instead, they want to take photos of graffiti, the shattered images that taunt them in their dreams. They don’t remember their dreams. They don’t know that remembrance is premonition, that their names are premonitions of death, are the encrypted dreams of judges, of obituaries and rainwater and pink filth. They only know what the cops have told them to know. Refuse to give them directions. Refuse all interpretations. Your exploded lacrimal gland is not a symbol of their despair.

Communism and Poetry | Writing Against Capital

Joshua Clover (et al.) | The Other Minimal Demand. Sean Pryor | The Relation Between Poetry and Poems Is Political, Sometimes. Tyrone Williams | “The Changing Same”: Value in Marx and Amiri Baraka. Alberto Toscano | Mayakovsky at Mirafori: Operaismo and the Negation of Poetry. Andrea Brady | Sean Bonney: Poet Out of Time. Rob Halpern | Notes on Poetry and Communism: Abolition, Solidarity, Love. Julian Murphet | “Wide as Targes Let Them Be,” or, How a Poem Is a Barricade. Keston Sutherland | Free Dissociation/Logic. […]

This book offers an examination of the political dimensions of a number of Jean-Luc Godard’s films from the 1960s to the present. The author seeks to dispel the myth that Godard’s work abandoned political questions after the 1970s and was limited to merely formal ones. The book includes a discussion of militant filmmaking and Godard’s little-known films from the Dziga Vertov Group period, which were made in collaboration with Jean-Pierre Gorin. The chapters present a thorough account of Godard’s investigations on the issue of aesthetic-political representation, including his controversial juxtaposition of the Shoah and the Nakba. Emmelhainz argues that the French director’s oeuvre highlights contradictions between aesthetics and politics in a quest for a dialectical image. By positing all of Godard’s work as experiments in dialectical materialist filmmaking, from Le Petit soldat (1963) to Adieu au langage (2014), the author brings attention to Godard’s ongoing inquiry on the role filmmakers can have in progressive political engagement.

Steve Dalachinsky is a poet of the real world in a time when reality is despised, dismissed, not understood or lied about. Amiri Baraka
I stand outside / on the edge of my shadow / at the edge of the doorway / & the nite is crying / small tears / for me

David Rattray | How I Became One of the Invisible, New Edition

Since its first publication in 1992, David Rattray’s How I Became One of the Invisible has functioned as a kind of secret history and guidebook to a poetic and mystical tradition running through Western civilization from Pythagoras to In Nomine music to Hölderlin and Antonin Artaud. Rattray not only excavated this tradition, he embodied and lived it. He studied at Harvard and the Sorbonne but remained a poet, outside the academy. His stories “Van” and “The Angel” chronicle his travels in southern Mexico with his friend, the poet Alden Van Buskirk, and his adventures after graduating from Dartmouth in the mid-1950s. Eclipsed by the more mediagenic Beat writers during his lifetime, Rattray has become a powerful influence on contemporary artists and writers.

In her writings on prostitution, sex, and the family from the early years of the Bolshevik Revolution, Alexandra Kollontai presents comradeship and solidarity as sensibilities necessary for building a communist society. She associates comradeship with a “feeling of belongingness,” a relation among free and equal communist workers. “In place of the individual and egoistic family, a great universal family of workers will develop, in which all the workers, men and women, will above all be comrades.” “Comrade” points to a mode of belonging opposed to the isolation, hierarchy, and oppression of bourgeois forms of relation, particularly of the family under capitalism. It’s a mode characterized by equality, solidarity, and respect; collectivity replaces egoism and self-assertion. In Russian, the word “comrade,” tovarish, is gender neutral, so it replaces gendered forms of address.

VERSO 2.3 There was a second woman and she was a woman of the book, a woman of diaries, and a woman of such compact violence that in an instant, brief as it was, she fell in love with the woman of forbidding language. No one has asked me about her.
VERSO 2.4 All your women, I notice now, leave on boats to get abortions, or leave by poisoning from their own hands, or sit gazing at insects, or leave in flights over cliffs, or leave by their imagination but leave trying to attend to their own intelligence, “but” for the love of god, they’d be human.

Trane was the father. Pharoah was the son. I was the holy ghost.

The first half is formed of diary-like entries written by Riley after the news of her son’s death, the entries building to paint a live portrait of loss. The second half is a ruminative post script written some years later with Riley looking back at the experience philosophically and attempting to map through it a literature of consolation. Written in precise and exacting prose, with remarkable insight and grace this book will form kind counsel to all those living on in the wake of grief.